This week I started at GitHub working on the security team. As part of our indoctrination to GitHub, we learn about the company’s core values - chief amongst them, is empathy. This kind of reminded me of a recent situation since they are tangentially related.

I had an interesting revelation and conversation recently. My son started Kindergarten a few weeks ago. We’re learning the ropes as newcomers to the school system. During their indoctrination, the school reminded us that some children have peanut allergies and that, in order to make it a more inclusive environment, we should avoid packing items that contain nuts for our kid’s lunch and snacks.

Now, our son loves peanut butter and jelly sandwiches. So a few times now, we’ve packed this for him in his lunch. When our son first explained this to us, we were confused. We thought he was saying that children with nut allergies have to sit at a table for just them. Kind of being “old school”, former military, etc. - I still have some of that “yeah that makes sense, they are the ones with the allergy, you’d want to separate them”.

What I didn’t realize until his several reiterations of the situation was that - he meant he was sitting alone at a table designated for children who brought items with nuts in them.

I admit, my first reaction was “Why are they ostracizing my child for bringing a peanut butter sandwich! What, are they punishing him?”. Immediately I realized, well, no… WE are kind of the assholes here. Bringing a potentially lethal food item to the lunch table for other children.

Again, I’d like to take a moment to point out or reiterate a couple things:

BUT, I still had a moment: 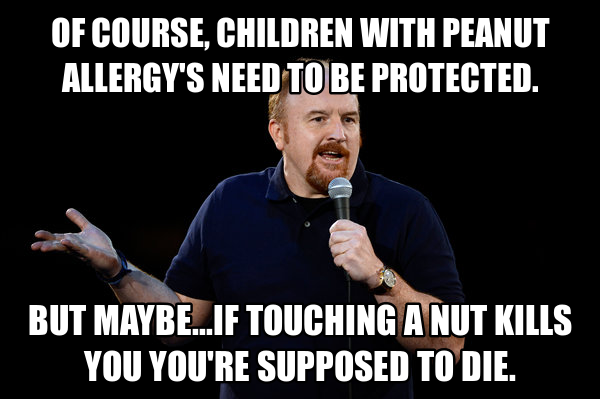 However, circling back to empathy… in the end, I realized the school was right. I can’t just smoke anywhere I want because its harmful to other people (I don’t smoke but that’s not the point). The same rule should apply to toxic substances where children eat and frankly, it is a new world compared to the way I grew up.

Attitudes have changed, and I believe for the better. Taking other people into consideration SHOULD be something we are teaching our children from a young age. Not through fluffy talk but through our actions. This salty curmudgeon would like to formally announce - I was wrong in my initial reaction and glad my son is being raised with these values both at home AND at school. Society will only progress for the better when we teach ourselves from a young age to value other’s needs over our own selfish desires (for a super fucking tasty sandwich, I might add - shoutout to my wife!).